Wow, what a night!

So school finished for the weekend on Friday and instead of a calm end to the day, sinking into the sofa and putting a film on, I eagerly began sorting the final preparations for Teachmeet MK. After what seemed like months of planning, although it wasn’t that much, and many generous donations by different companies to cover our costs and offer raffle prizes we were ready to go. The day was finally here! 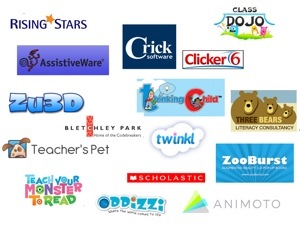 Thanks to the fantastic team who were organising the event with me preparations were already underway when I got there. As I arrived Drew Buddy (aka. @digitalmaverick) was arriving ready to be our host for the evening. And as quick as that re were ready to go. People were beginning to arrive from all over the country – the furthest travelers who I heard of were Manchester and Wales! 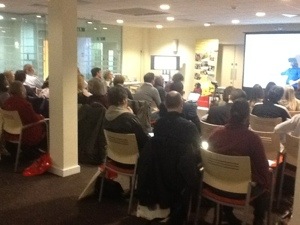 Everyone watching and listening carefully at Teachmeet MK

After introductions we began hearing about the fabulous work on Medical Detection Dogs and how they are able to help those suffering from a range of illnesses such as severe diabetes and sensing cancer within people for medical tests can. One story that was shared was that of a girl with severe diabetes who could have up to 28 Hypos in 12 hours and prior to the dog was hospitalised as these could not be controlled. Upon getting the dog, the dog could lick her hand 3 times as her blood sugar was dropping and allow her to medicate herself before it was too late. This then meant that she could live an almost normal life out of hospital. As well as this amazing work, we hear about how one school have integrated the charity’s work into their curriculum and have adopted a dog. We are very pleased to be sponsoring this charity with Teachmeet MK and all raffle ticket sales will be going there.

To see the full presentation from the Medical Detection Dogs watch it on YouTube and their website here.

Overall we raised £127 for the Medical Detection Dogs! Thanks everyone.

The evening continued with deluge of fabulous presentations and ideas ranging from Code breaking with Bletchley Park, to getting children active before learning, suggestions of fabulous resources and how to get children into coding. You can check out the full list of videos on YouTube here. 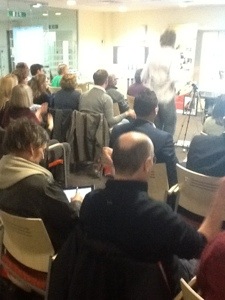 Every getting ready to do P.E. in the classroom

After the half-way break we were treated to some out-of-your-seat fun from Peter Ford from NoTosh who got us all thinking about how we can make learning epic! This meant that even those who were not presenting got a chance to share their fabulous ideas with everyone and it was a frantic few minutes! 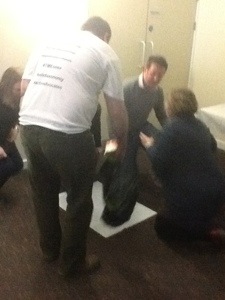 Getting into groups to suggest how to make learning epic!

There were some brilliant ideas shared, you can see them here:

After this we were back to some more fantastic presentations and sharing.

Overall it was a fabulous night. We have a live stream which was being watching by viewers on the internet as well as having it recorded so that those ideas can be revisted whenever. Present on the night we had over 50 people who gave up their Friday evening to learn and share together!

We also had this brilliant visual wall to remember the event by: 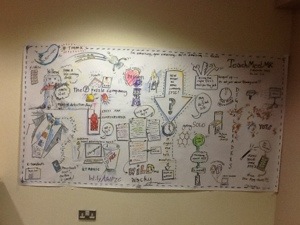 AND we were trending on Twitter in the UK! 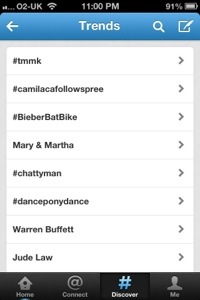 At last, exhausted we all made our ways home. I huge thank you to everyone who got involved, presented and attended. I hope you all learned as much as I did as well as making some new connections. I hope that there will be another Teachmeet MK in the future and look forward to seeing you all again.

Ian Harcombe (@MrHarcombe) created a Storify of all the tweets from the evening, this includes links to the brilliant ideas shared so do check it out!