This Summer I attended the #CASinclude’s Diversity & Inclusion in Computing Education Conference 2016 where I spent some time reflecting on Girl’s attitudes towards Computing and ICT and overall stereotyped beliefs surrounding what Computing was. This was further developed by a fabulous talk by
@Girls2Geeks who shared her own thoughts and experiences as the only girl interested in tech in her club.

Check out @Girls2Geeks website for more inspiration on how to encourage girls to code! #include pic.twitter.com/KOMaFRRgRg

This got me thinking even more. Frequently I hear children, not just girls, say things like ‘I don’t like Maths’ or ‘Geography is boring’ and it always struck me as strange – how can you hate everything possible related to that subject? Well of course, you can’t. It’s a belief you have from a select number of experiences. With this in mind, I thought about if we have a view of Computing as being ‘for boys’ or ‘for geeks’ or the like, then again this is going to be generalised from a few, select experiences. What if we gave them more experiences? Could we change that belief?

Here I focus in on Computing. The subject where there are a lot of negative stereotypes, but also the one that I am most passionate about and can directly influence. Even within the subject of Computing, when pupils talk about a ‘Computer Scientist’ they frequently mean a programmer, so even if those negative stereotypes were correct, they didn’t fit *everyone* who studies Computing. What could I do?

I decided to break Computing down into clear topic areas – related the the National Curriculum – as a clearly visual way of showing the pupils I work with that Computing is made up of different areas. By all means they can say ‘I don’t really like programming’ although I would be forced to see why that is, but as long as they can justify it, this is a much smaller generalisation to make. Now, I set about thinking what areas I would split the curriculum into and how I would show the children this.

Around the same time as I was thinking about all of this, I was beginning to arrange a Computing afternoon at my new school as explained here.

At this point, I didn’t have the ‘Computer Bytes’ name and so was pondering what I could call the afternoon I was planning. Stumped for ideas, I took to Twitter and asked for their help! Donna Rawling (@DdR333) and Zoe Bratley (@zoepembers) were amazingly helpful at trying to come up with names, their early suggestions were things like ‘Superhackers, Cool Coders, Net Ninjas’ which I loved, but I felt they would reinforce the idea that Computing was just another name for ‘Programming’ and then I realised I could use them to show the breadth of the subject.

In the end, I ended up with:

How will this reduce stereotypes?

The idea is that by showing children that the activities we teach in Computing are all related to different subject areas, if there is a part of the subject they do not like. They will dislike that section rather than the whole thing. Alongside this, whilst they may have specific preconceptions about what a programmer is like, they may not have thought about someone who works with Networking and the Internet and therefore we might be able to create a more positive stereotype in this area.

Of course, this is all just in theory and more than anything is should give them children a wider understanding into the subject of Computing and all the opportunities that could arise if they decided to pursue this subject in the future.

As an added bonus I asked a friend of mine if he could make gender-neutral cartoon characters which we could associate with each skill. 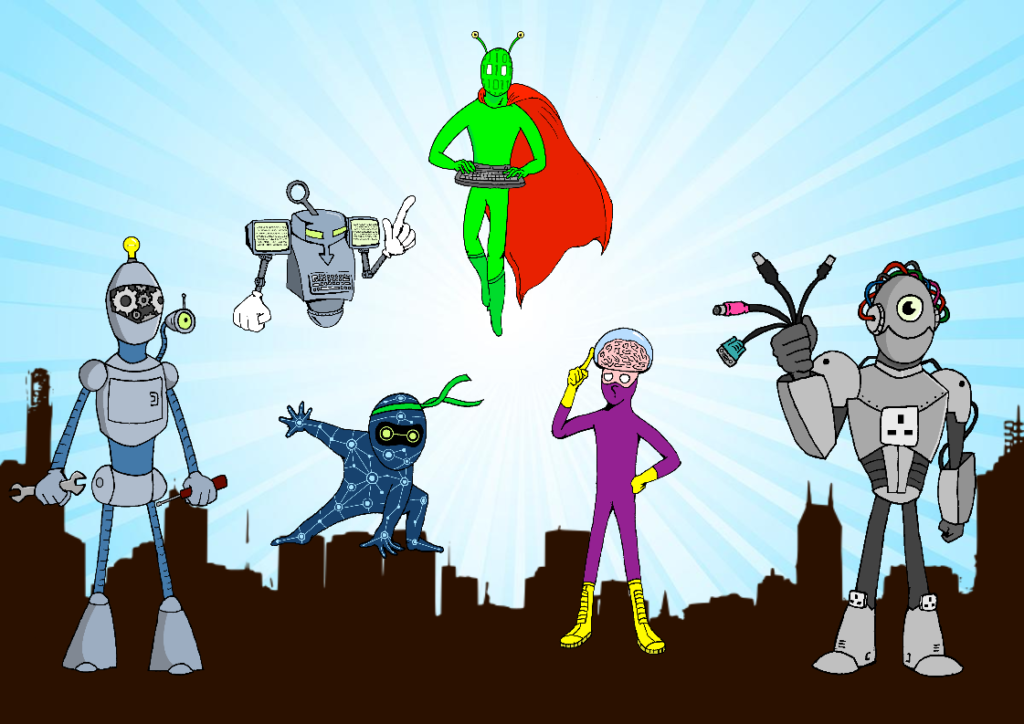