This week marked my school staff’s first official introduction into the new Computing curriculum. I, myself, have been on a big journey since the Computing Programme of Study was first announced. When I first heard about it I was surprised and shocked, would we be able to teach this? How on earth would I be able to support my staff? Some of whom were still not confident delivering the old ICT curriculum! Well a year (and a bit) on and many hours spent on Twitter, reading blogposts, attending courses (and the like) I’m  ready and raring to go. I have just completed writing the curriculum including main strands or topics, learning intentions and success criteria, activity suggestions and learning outcomes. This is something that I feel truly covers the scope of understanding that is necessary in the new curriculum whilst modelling how exciting, creative and exploratory Computer Science can really be.

I made the decision recently that there was no way I could give staff as much information as they needed to teach the new curriculum from one twilight session. We made the decision to just introduce staff to the content necessary for Autumn 1 and 2, ready to teach those aspects, and I will be ready with another INSET or twilight after October half term to prepare everyone for Spring. This meant that I had 3 focuses for this twilight:

I began the session with the good old favourite ‘Shift Happens: Did you Know?’ which although old now, serves as the perfect example as to why we need to embrace change of keep evolving our curriculum and teaching methods in line with new developments and technologies.

Following this, I outlined the basic changes in the curriculum – both at a national level e.g. the name change from ICT to Computing and at our school level e.g. ESafety now part of Digital Citizenship. This led nicely into a pedagogical change which I wanted to make within the school: a shift from ‘Teaching’ to ‘Facilitating’. Basically, moving away from the ‘To add a slide, you need to click here. Now, change the font by clicking here’ to ‘What symbols/icons do we usually see when we want to add a slide? Maybe a ‘+’ or a blank rectangle. What about to change font? Maybe a capital A or a font name in a drop down.’ Allowing children to recognise common features of software/applications is important as throughout their lives they will see so many changes. Learning that a button is in a certain place on one program will not be enough.

To support my motives for these changes, I adapted a prezi by Kevin Roberts called ‘Teaching 21st Century Students’ which wasn’t specifically designed for the Computing curriculum but supported my ideas for the development of pedagogy. Here is my adapted version:

I spent a fair bit of time explaining each of my points within the Prezi and explaining the rationale behind each step. This made it very clear WHY this shift was important and why the introduction of the new Computing curriculum made it a good time to happen.

By now, I had hopefully achieved step 1: explaining why the curriculum needed to be changed! Now, I started focussing on the Computing Curriculum itself beginning with the National Curriculum and then progressing to showing what the curriculum will look like in our school. This was only a brief overview showing each of the broad ‘topics’ for each half term. You can see my blocks below:

You will notice that years 5 and 6 do not learn algorithms – this is based on the premise that by this time they have learned the strategies for breaking down problems into each of the steps. However, as we have not previously taught algorithms at this stage, we cannot make that assumption about our current year 5 and 6s. For this reason they will not be starting the 5/6 curriculum this year, and maybe not for a few years depending on how quickly they learn the steps beforehand. I then showed them the learning outcomes I have composed for the Autumn term including the progression from Year 1 to 6 to aid differentiation. For more information about my Computing curriculum, see the blogpost here.

Introducing the staff to the Autumn 1 strand of the Computing curriculum: ‘What is a Computer?’

Moving on to the second part of my plan: Introducing staff to the ‘What is a Computer?’ I asked groups to sort a set of photos into ‘What is a Computing’ and ‘What isn’t a computer’. The photos I used were similar to these:

This led to many interesting questions and discussion re: what actually is a computer. It is also an example of a starter activity which the children can be involved with. The conversations of why some things are NOT computers were as useful as why some were computers. We then asked the staff to divide them into what they thought children should be able to recognise in years 1/2, in years 3/4 and in years 5/6 which led them to further aware of progression within this area. 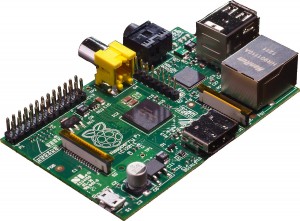 By lower key stage 2 we are going to start introducing the Raspberry Pis to introduce the concept of inputs/outputs and the basics of what a computer needs to work and what it needs for you to use it. For those that haven’t seen a Raspberry Pi, I hand one of the school ones around for people to look at and do a brief explanation of what it has on it and how it works. If you want information about how to use Raspberry Pis in the primary classroom check out my previous blog posts: 1, 2, 3 and the MK:Pi group here. 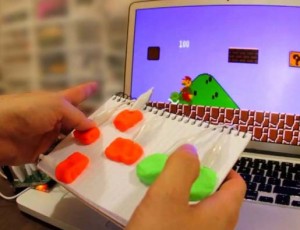 To end the second part of the INSET we show off the Makey Makeys, a great way to show that a computer input can be anything – it’s the programming that tells the computer what to do with that signal. I had set up 4 examples of Makey Makey running different things. One was a fruit and jellybaby piano – one of the examples suggested in the instructions, one with a play-dough controller and a Scratch game and one with a cardboard guitar and a guitar hero style game. We left these set up during a short break so people could have a go without feeling pressured – the guitar hero proved VERY popular!

Introducing staff to the Autumn 2 strand of the Computing curriculum: ‘Algorithms’

The final section of our INSET was introducing staff to Algorithms. Here we did a basic explanation and then read the ‘Ant and the Grasshopper: A Fable of Algorithms‘ fable with a twist courtesy of Computational Tales. I previously used this with some year 5 children who had no idea what an algorithm was before they read it. Afterwards, they were able to give me a clear explanation!

Now that everyone had a good understanding of what an algorithm was, we asked them to come up with the algorithm for making a cup of tea and then share it with each other. From here, we showed them the Raspberry Jam Man by Phill Bagge:

At this point, I felt that it was important to show the distinction between computing concepts and using a computer, and ‘computing unplugged’ activities are great for this. By the end of lower key stage 2, hopefully the children will be able to use their understanding of algorithms to explain how a computer searches and sorts different groups of information. Here I found some really useful activities from CS Unplugged.

We began with sorting algorithms and had half of the staff exploring searching for a specific number and half of the staff sorting objects into weights. We then asked them to share what they found. The activities were similar to these except we did them with staff rather than watching a video:

Following this, we used the battleships activities to show different types of search and to instigate discussions about efficiency in algorithms. As an example, to begin with you’re trying to find my battleship number 92, you ask if it’s battleship C, I say no, you ask if it’s K, I say no…and so on. Eventually you will find the right one, but it’s slow! Next, we play the same game but this time the battleships are in numerical order. This time you’re looking for number 139. Where will you start? Let’s choose battleship M, it’s 100 so now you can cross off every number which is before it. This is a more efficient method. Finally, you can group them by adding up the digits so 21 would be ‘3’ and in a column with all other numbers with digits which add up to 3. This time there are only 3/4 battleships in each column so it’s even more efficient.

We were now drawing to the end of the twilight so to bring it together I explain the information sheets which I had designed for staff. These had pre-written LOs and SCs, suggested activities and learning outcomes. This is as much information as we are giving to allow teacher’s to plan their own Computing lessons.

To finish, I reminded everyone about why we were changing the curriculum and why the curriculum needed to change with this video from the pupils at Robin Hood Primary School, Birmingham:

Following the twilight, we received some very positive feedback. Teachers were asked to complete a questionnaire and they rated their own Computing subject knowledge as an average of 2.33 out of 5 prior to the INSET, this increased to 3.8 following it. Given that we have only covered 1/3 of the Computing curriculum at this point, this is very positive. As well as this, when considering their perceived confidence at teaching Computing as a subject, staff reported an average of 1.5 out of 5 before the Twilight and 4.6 afterwards. This has shown an incredible difference.