My reflections for this week have seemed harder to come by than with other weeks. I don’t think this is down to a lack of using the iPads, or a lack of new ideas, but instead that they’re becoming ‘normal’ for classroom life for myself and the children I work with. This is undeniably a good thing, they are a tool to be used appropriate, just as a pen or a text book and should not be cause for unnecessary attentions but equally I do want to document our experiences clearly, accurately and fairly.

In maths this week we continued to use the iPads to share our learning via Padlet. We were starting the topic of fractions and so I began by asking them to create a mindmap showing what they already knew, they then shared it and discussed. My colleague was covering my lesson as it was my PPA time and I had left the children the task of solving a Tarsia in group by matching the equivalent fractions. Some of the children did not have time to finish during the lesson and so they took a picture of the progress they made so I would be able to see. You can see the wall here:

This week I was lucky enough to put my experiences so far to use and spend even more time sharing by hosting a Twitter chat #mathscpdchat with the topic ‘How do you use technology to help maths learning in primary classrooms?’ This was a great opportunity to see what other teachers were doing with tech in their classrooms; particularly with iPads. There was a great deal of praise for apps such as ShowMe and Explain Everything, Popplet for mind-mapping, Edmodo for group work, Socrative etc. There was an interesting discussion about the use of maths ‘games’ to practise skills – I think the final conclusion was that any games need to be paired with other activities such as explaining strategy and using those skills for some deeper level of learning (for a more detailed discussion on considerations when using apps which are games in the class room see this other post). The session was fast paced and full of ideas, I had a great time hosting it. To see a more detailed chat archive check out the NCETM page here.

During the maths chat there was one tweet in particular which inspired me:

The idea of children reflecting on and recording their own learning seemed like a great idea. Straight away my mind was racing with the possibilities. As well as getting them to recognise their learning as it happened, it was also a way for them to consolidate their learning and a tool to revisit their learning. As I had just started a new topic (Fractions) in Maths I decided to get the children to create a mind map for this. I looked at various examples of iPad apps to do this, my first thought was Popplet – something which I’d used before, however, with the free version you are limited to 5 mindmaps per device and this was no use with a class of 28. I decided to give Mindomo a try as it had options to include a variety of media, had some flexibility when it came to colours and could be exported to pdf or jpg. After the initial introduction to the app, and a reminder not to spend the entire time changing colours/fonts (in fact, they are only to change colours if it helps them organise content e.g. colour coding), the end of each lesson is spent with the children reflecting on their learning, sharing examples and adding to their mindmap.

This week we began a unit of work on Shakespeare, alongside our Tudors topic, and started by exploring who he was and information about the Globe theatre. One of our learning focuses during this introduction was to take notes – recording the important information and leaving out those words that weren’t needed to convey meaning. I suggested to the children that they could choose whether they would prefer a large piece of paper or an iPad to make their notes on but reminded them to think of the benefits to their learning and not just that they like using the iPads. What a group of them responded with really impressed me. They asked if they could use both, sceptical I asked why they would need both and explained why. As they were quicker at writing on paper than typing on the iPads they wanted to make their notes on paper but then they wanted the ability to share their ideas with their peers so that they could learn from each other and add notes where necessary. Their suggestion was to write the notes on paper, stop before the end of a lesson, take a photo of their notes so far and share them with each other on Padlet; this would then give them time to add to their notes with each others! How impressive – I was astounded at such rational logic!

It is worth noting that not every chose to use this method although the majority did. A couple of my lower ability boys, who have appalling handwriting, chose to use the iPads for the whole thing as well as a selection of other children. I do think that some of the children chose to use the iPad just because they wanted to use an iPad but we used this as a model for discussion about the pros and cons. At the end of the lesson some of the children acknowledged that they would have recorded more work if they hadn’t used the iPads so all in all the learning went far beyond the lesson objective.

The lesson proceeding the note taking lesson was taking those notes and creating mindmaps from them; representing their ideas pictorial and as memory cues rather than reading activities. Once again I gave the children the choice as to whether they wanted to create their mindmap on paper or the iPads using Mindomo. This time a lot more children wanted to do it  on paper, primarily because drawing on an iPad is hard! If you look at the Padlet wall below you can see that those who did create them on the iPad either didn’t get much done or drew their own pictures by hand to accompany their mind map.

R.E.
This week in R.E. was our first ‘sharing’ week where the children were responsible for teaching each other the information they had found about the religion they were studying the previous weeks. At the end of the lesson I was interested in seeing how they had found the activity, them rating how effective their teacher was and how much they thought they’d learned from the lesson. To do this I used an app called Socrative which has a range of fantastic functions but the best uses are for AfL. Using my room code the children log in and then I had set them a multiple choice question, this shows them 5 buttons each specifying A, B, C, D or E. On the board I then wrote the question ‘How effective do you think your teacher was? A not very effective, C average, E very effective’ and each of the children selected the answer they wanted. The app then shows how many people have replied and generates a live graph of responses. Here is an example: 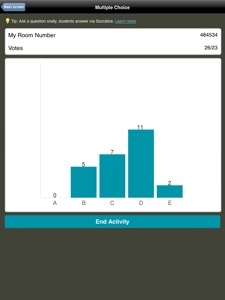 After this I then did what the app calls an ‘Exit Ticket’. Here the app has 4 stages: firstly your name, then ‘How did you find the material today?’ with suggestions such as ‘I totally get it’ and ‘I need some support’, to next ‘What have you learned?’ with an input box for the children to explain and then the final one is ‘solve the problem on the board’ which in this case I asked where the religion their partner was learning about began.

At the end of the exit ticket they submit responses and again my app tells me how many people have filled out the ticket. When I finish the session it then asks whether I want a report emailed to me. This sends a spreadsheet of the children’s results to my email and I can see their exact ideas ready for my next lesson! I cannot praise Socrative enough, its uses are phenomenal, the benefits of it in terms of informing planning and checking understanding are great and the instant results are exciting for the children. I look forward to using this more in the future.