During the Easter holidays, my Digital Leaders were lucky enough to be invited to Pi Towers for a day exploring and learning whilst sharing their own ideas and opinions with the foundation. When I explained the potential trip to the children, they were excited. When I handed out the letters, they nearly exploded. All the slips were back the following day – digital leaders were queuing at my door before school start and it wasn’t even first come, first served!

My first realisation was that calling a building ‘Pi Towers’ puts interesting ideas in children’s heads. Firstly they were imagining a castle:

After that, they started predicting something like this, but in the shape of a Raspberry:

I spent a little bit of time explaining what an ‘office’ was like and after trying to paint a picture like this:

Upon arriving at Pi Towers, we began by exploring the Astro Pi. They started by looking through an example python script to make text scroll across the LED matrix. There is quite a range of abilities within my group of Digital Leaders, but it was great to see all 19 of them having a go and trying their best. 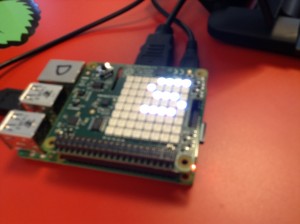 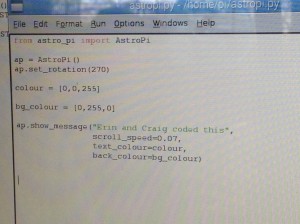 This was a brilliant, hands on, interaction with python and built nicely on what we’d been learning to do with Pibrella. They experimented changing the colours and speeds as well as the message which it was showing.

This then led to more detailed conversations about what the Astro Pi board can do and the children were given the opportunity to consider their ideas and complete a competition entry. 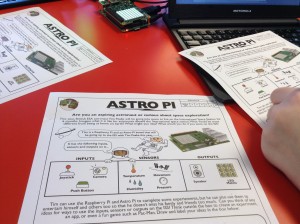 Now the children broke into groups trying some of the Foundation’s resources: Minecraft Pi, GPIO Music Box, Teacher Detecter and Robot Antenna. We did do some mild differentiating here, considering those who were more comfortable with Scratch and those who would want challenging with Python including breadboards and GPIO pins.

Watching the children following these guides was interesting. As the resources are intended for independent use, we didn’t give them any input and instead left them to work through them in pairs. This is where we found out how easy instructions are to follow when you have no idea what you’re doing. Now, I spend a lot of time explaining to my class that when it comes to code, they have to copy things EXACTLY because the computer doesn’t guess like a teacher does. This message is then repeated again and again and they’re starting to get it…although this can sometimes cause problems.

The first instructions for the Python programmers were to use Terminal to check the files they needed were in place and subsequently open IDLE. The instructions stated ‘Type the command ls and you should see the files and folders in your home directory.’, so a pair of my children put up their hands and reported the computer wasn’t doing anything. The instructions hadn’t said: ‘press enter’ so they had merely typed the command and expected an immediate response!

Following this there were other interesting discoveries such as one part of the Minecraft which said ‘Alternatively’ despite a couple of my Digital Leaders not knowing what the word meant, those that did had all written both commands. They’d gotten into the routine of copying the sections of code and were almost on auto-pilot!

Watching the children work through the activities was definitely insightful and they learned a lot from the process. Not to mention the super role models that those who work for the Foundation are (from a programming perspective anyway 😉 ) 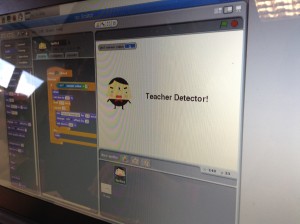 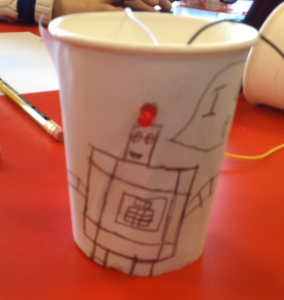 Next it was lunchtime and they had a lovely picnic with their packed lunch and some Babbage teddies.

After lunch the foundation asked them some questions about what they’d thought and their opinions on upcoming Pi projects. The children were very proud that their opinions mattered and I didn’t see there answers (they were written) but the ones I did peak at seemed very impressive.

All in all they had a great day at Pi Towers, learned lots and enjoyed it. Hopefully the Foundation found it useful as well!