Back in November I attended the first in three courses in a pilot for the LEA surrounding ‘Creative Maths’. Ever eager to attend CPD opportunities I approached the course with an open mind and had a great time.

The session started with 3 activities around a room, one being an outdoor checkers board which had in the instance been divided into quarters with coordinates marked on it. We all gathered around it to find sweets scattered at points throughout, if we named the coordinate, we got the sweet, guess where the best sweets were? The 3rd quadrant! This was an exciting beginning to the day – now what else can we do with the checkerboard? 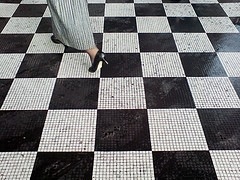 We were encouraged to list as many ideas of possible, starting with the obvious – symmetry, reflections, to more complex things like perimeter and area, enlarging shapes etc. Now on to the next step – what about with a class? 5 children on the mat what are the others doing? How about teams? The person on the mat can only move if told to by a teammate. What about having it as an activity for one group whilst the others use smaller boards on tables and the rotate around?

Of course the checkerboard is not the only way of achieving such activities. If you have a tile carpet you’re half way there! Why not go outside and sketch one on the play ground?

After this we moved on to an up and about activity, numbers and words stuck around the room. What can we do with this? True/false statement, always, sometimes, never statements, find evens or in pairs find equivalent fractions or decimals, percentages and fractions. Lots of ideas for getting the children up, about and learning!

Next we moved on to an interesting activity to decide which pack of strawberry laces we would want (A, B, C), 1 packet was on the table for us to see (A), one was in a cupboard but we had a bar chart telling us exact lengths of all the laces in the packets (B) and finally we had a pictogram which showed how many sweets but in ranges e.g. 4 laces between 12cm and 15cm (C). This was an intriguing way to begin data handling and even as adults we started searching our minds for the best approach. I can only imagine the excitement an activity like this could elicit from children – can’t wait to try it out. 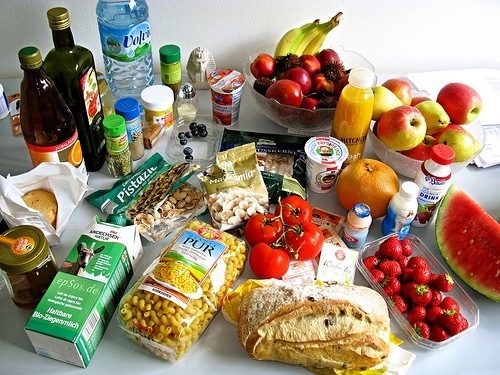 Now we had a table of random food items in front of us – plan some maths; what are you going to do? Start with the more obvious cost, money etc, what about weight – estimate and then measure? For more able children what about looking at the sugars percentages, comparing with daily allowance? Planning a meal or a snack with no more than 20% of your daily allowance for each item. The list is endless…

One of the most frequent reasons for not having lessons like these is that they take a lot of time to resource and prepare – did these? Teachers frequently create more work for themselves than they need to. The need to control a lesson and the learning outcomes for the activities means offering clue cards and giving instructions when the children can think for themselves. There will of course need to be scaffolding through differentiation but this should be within the activity letting the children still think independently but giving them less options so they’re not overwhelmed.

At the beginning of the following session we were greeted with this: 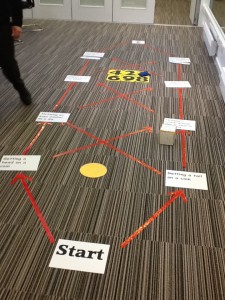 In two teams we had to complete a probability maze. First we had to decide were we going heads, or tails? Then, throwing a giant coin, if we were successful we could move on to the next level. Next, it was the other team’s turn, they they were right they could move on too, if not, they had to try again next turn. Obviously with the coin throw there is an equal chance whereas later on throughout the game there were options where you would be more likely to move forward if you chose it.

The game was a brilliant way to get us thinking and explaining why we were choosing what we chose. We discussed differentiation and using the same format in different ways e.g. giving higher attaining children the opportunity to create their own levels. Even as adults it was fun using the game and racing the other team to the end (although maybe that is my competitive nature?) and I think this will definitely tick the ‘engagement’ box for a lesson.

This idea was based on a ‘board game’ probability worksheet which in itself seems relatively fun and engaging however by jumping into the worksheet there is a whole new range of learning and a much more kinesthetic approach.