This week was the first week I have noticed a usage slump in the iPads. After weeks of finding reasons to use them to enhance to the curriculum this week seemed like a week which didn’t suit their use. I am not sure whether this is due to my own time constraints, not having time to think reflect on appropriateness, or whether they just did not suit the lessons this week.

In Science this week we have been learning about the skeleton – its function and role as well as naming the different bones. We began this lesson, in groups, by drawing around a person on large paper and trying to put post it notes in the correct places. After this group activity, and the collaboration, I wanted to check the children had understood and could recognise the bones in the body. To do this they took photos of each other and using PicCollage (I wanted to use Skitch but couldn’t download it as our school iPads are not running iOS7 yet) they added the the labels for the bone names. As I can’t show you their’s I asked a child to label me as well: 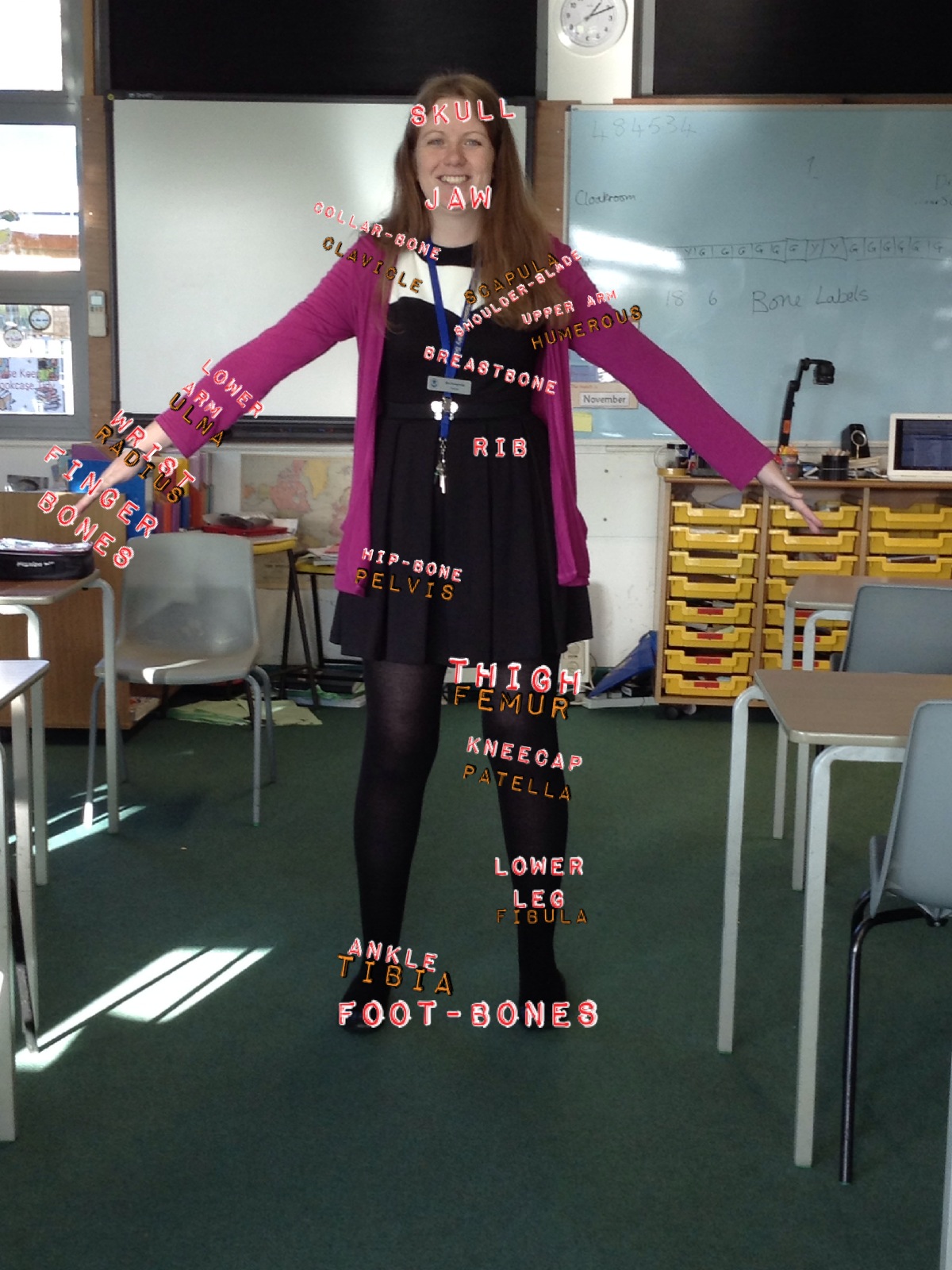 In maths this week we have been documenting our learning with mindmaps using the app Mindomo. Mindmaps are a powerful tool that children at this age often do not realise, they are too far away from structured revision and are often not encouraged to organise their thoughts. My own previous uses of mind maps in class, looking back, had involved a focus on brainstorming ideas not on recording information in an organised way. Anyway, this week we were starting to look at fractions in maths and I wanted the children to be able to visibly see the learning that was taking place but also to be able to refer back to a previous lesson when they needed reminders of how we did things. With this in mind, from the first lesson when we did a ‘what we know about fractions’, to the end of the topic each child made a daily, personally, update to their fractions learning. I told them they had to do SOMETHING on their mind maps at the end of each lesson but the content was what they thought would benefit them more. They could include pictures of their work or a model on a whiteboard or anything they thought would be useful. Here are two examples: 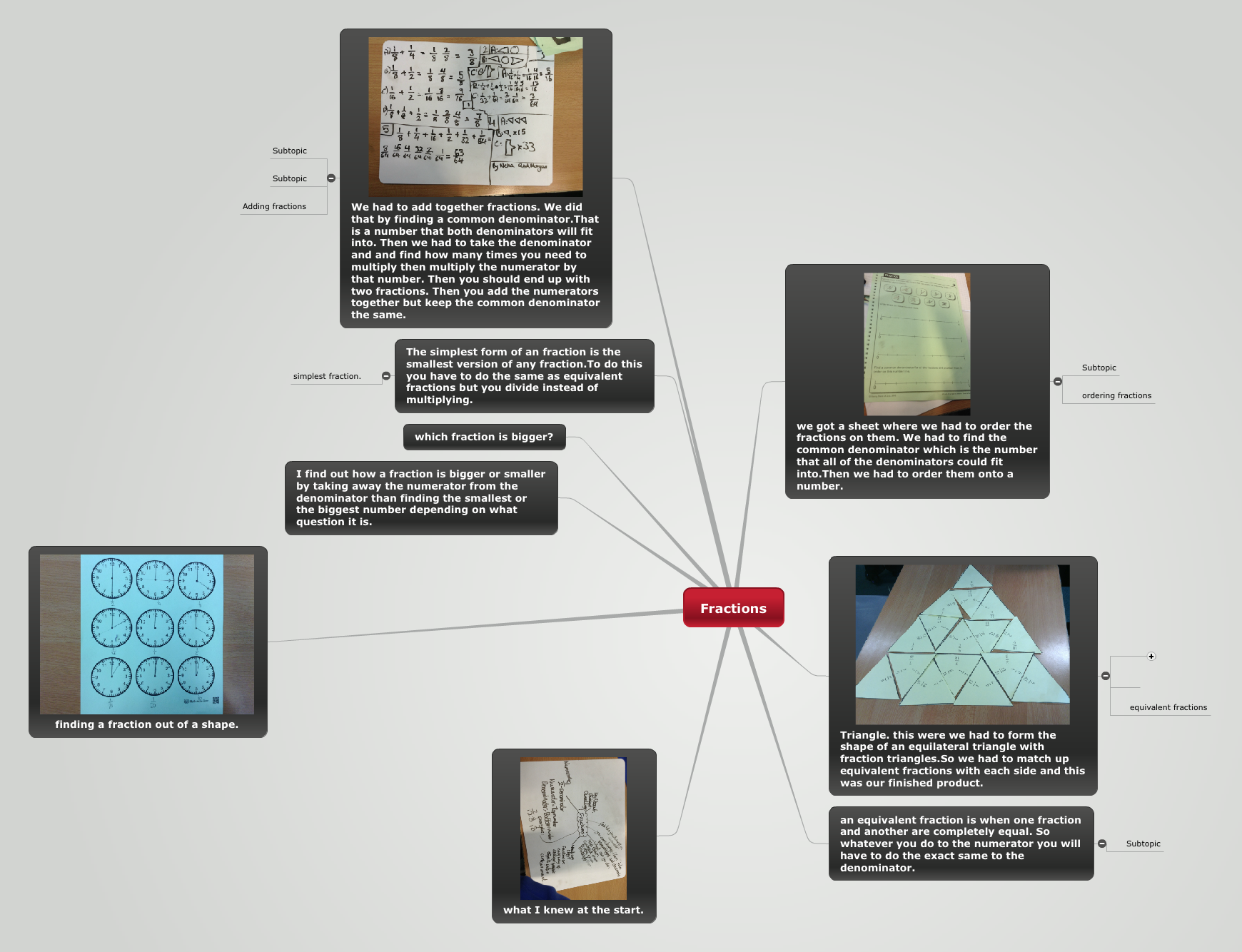 The beauty of using the iPad for this activity, something that many would argue would be easier to do on paper, were numerous but here are a few.

Overall, I think recording their learning helped them to focus their reflections. There were obviously those mind maps that were less well thought out e.g. ‘I learned how to simplify fractions today [photo of board here]’ but we discussed examples and shared good models. We talked about looking back at them each day, would they remember what they did in the photo or would they need an explanation as well as a photo? I am also planning to return to these mind maps in a few months and ask the children what they’d learned during this time. This will give them a chance, when they have probably forgotten the ins and outs of those lessons, to see if the mind map is detailed enough to prompt their memory and aid recall.

Finally, this week was Children in Need (CiN) week and so, like many schools, we Did Something Different. In fact, at our school it is called ‘Do Something Different Day’. What this means in practise is that year 5 and 6 children become ‘trio masters’ and are blessed with the responsibility of supervising, and organising, a lower key stage 2 pupil, and a key stage 1 pupil through a variety of different classrooms and activities throughout the day. What it means for teachers is that we teach classes that have some children from year 1 all the way through to some children from year 6.

This set the cogs whirring for me – how would iPads fit in a setting of children with such a broad range of ages and skills? Up until now iPads have only been used with year 5 and 6 children so these other children had no prior, school use, of iPads. We did a ‘drawing activity’ creating a picture which was relevant to CiN using a paint app called ‘Draw Free’. I know this is an activity that could be done without the ipad, and it does not show off the full strength of the iPads, however, it was a medium that children if any age would understand with no prior knowledge and we only had 30 minutes if the children didn’t get lost when looking for our classroom!

I did a basic intro about CiN, discussed why we were ‘Doing Something Different’ and then showed the children the iPads, where the app was, how to get a blank page and let the get started. I’m sure you don’t need me to tell you that they were off… No matter the age, no matter the level of experience, they were off…

Personally, I find drawing very challenging in life, and even more challenging on an iPad – I have seen examples of the wonderful creations skilled artists can do an an iPad, so I know it’s possible, but it does elude me. These children didn’t seem to have these hang ups though. I expected some to get frustrated that they could create better art on paper but this didn’t come. Don’t get me wrong, their were clearly some children there with more artistic talent than others, but all seemed happy with their end product.

I did have one disappointment with a boy from one of the lower years. He often finds it hard to concentrate in class, and has 1:1 support, but he spent time creating a lovely picture with Pudsey and a spotty background. Finishing his work there was 10 minutes to go do he rubbed it all out before I could tell him how to save it! Unfortunately in the next 10 minutes he didn’t have time to create anything as good before we had to end the lesson. Now obviously this can be easily resolved, he can be taught how to save and move on, but it acted as a reminder of the fragility of digital content. How one small action can make it disappear forever!

Here is a selection of the pictures the children created:

Finally, I have to say that the protective cases we have for our iPad minis really came in handy today. This was because, especially with smaller children with big tables, the children often bedded something to hold on to. With the iPads in the standard iPad cases children end up holding the screen and trying to lean the iPad but with their lack of understanding of angles they fall. Our cases gave the children a clear area to grip so that they could support the iPad and have a hand free to use the device. (They are also I credibly handy for me when I’m handing they round – literally being about to grab 8 at once!)

I am trying to find a picture/example of the cases we have but can’t remember what they’re called. When I find out, I’ll put the info here!